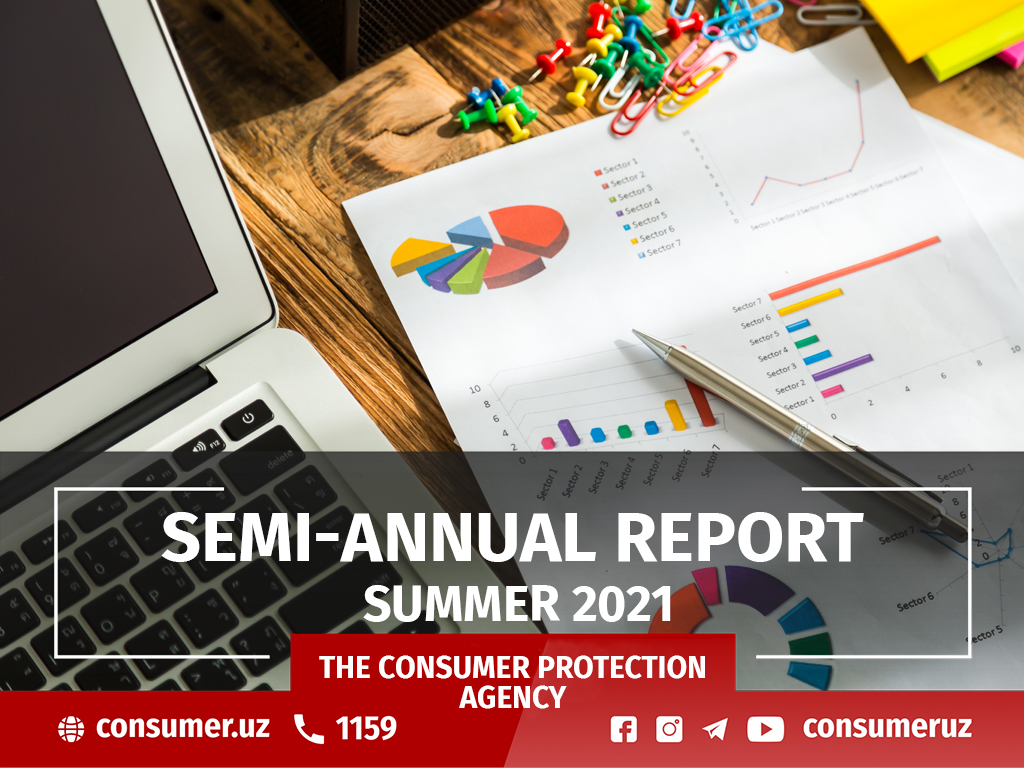 Major work done by the Consumer Protection Agency under the Antimonopoly committee of the Republic of Uzbekistan during the first half of 2021.

From January until June 2021, the Аgency received 15,609 consumers’ appeals overall.

52.5% of the appeals were related to housing and utilities, transport services; 20.5% to trade; 13.6% to communication, financial and social services; and 13.4% to advertising and other issues.

About 5.7 million consumers’ rights were violated and it was found that they suffered damage in amount of 130.2 billion Uzbek sums (122 thousand USD).

In addition, 15.2 billion Uzbek sums identified during the consideration of appeals, 88.2% of them were returned to consumers.

In order to increase consumer culture and legal knowledge of the population and entrepreneurs, 283 events were organized, a total of 2,234 materials and legal information on various topics in the media (244 TV programs, 162 radio broadcasts, 105 articles in print, 1723 in electronic media materials) were published.

In particular, in honor of the “Year of Youth Support and Public Health” and March 15 – World Consumer Rights Day in 141 schools and universities presentations were held on the following topics “Consumer in the digital space”, “Rational Consumption”. Overall, 11.5 thousand young people participated in these events.

Also in April, a large-scale educational work dedicated to the twenty-fifth anniversary of the adoption of the Law of the Republic of Uzbekistan “On Consumer Protection” was organized. In particular, meetings with 4,240 young people were organized in 58 educational institutions in the regions of the country on the topic “Consumer rights under state protection.”

In order to determine the level of knowledge of the population about their rights and the law, as well as to provide them with legal assistance, 48 blitz surveys were conducted on-site and through social networks, where 7,000 individual participated.

Besides, to increase consumer awareness, 8,300 posters with the Agency’s activities and hotlines were placed in the neighborhoods, public service centers, public receptions, markets and other facilities.

About 50 infographics, photos, audio and video information are posted on the official website of the Agency (www.consumer.uz). Also, the Central office of the Agency held 9 press conferences and briefings for the media.

Consumer Law and other legal documents

In order to protect the rights of consumers, 21 valid normative acts were registered, the impact of 66 draft documents developed by other ministries and departments on consumers were assessed, and appropriate conclusions and recommendations were given. The Legislative Chamber of the Oliy Majlis is considering two bills.

66 lawsuits were filed with the courts on consumer protection and regulation of the advertising market, of which 20 were satisfied, 24 were rejected and 22 are under consideration.

16,673 studies (monitoring) were conducted on the placement and distribution of advertisements, and in 9,241 cases, various shortcomings were identified and measures were taken to eliminate them.

The Agency participated in 9 international events on consumer protection and regulation of the advertising market.

A 6-month project on “Specializing and improving consumer affairs in Uzbekistan” was implemented in cooperation with the Korea Consumer Agency (KCA) and a granted by the Korea International Cooperation Agency (KOICA). Experience and information were exchanged 15 times through video conferencing in the areas of improving knowledge, working with appeals, consulting, improving legislation and working methods, useful educational video materials and PR-videos were prepared for consumers.

On June 29, 2021, a Memorandum of Understanding was signed remotely between the Korea Consumer Agency (Republic of Korea) and the Consumer Protection Agency, and the future joint activities were identified.